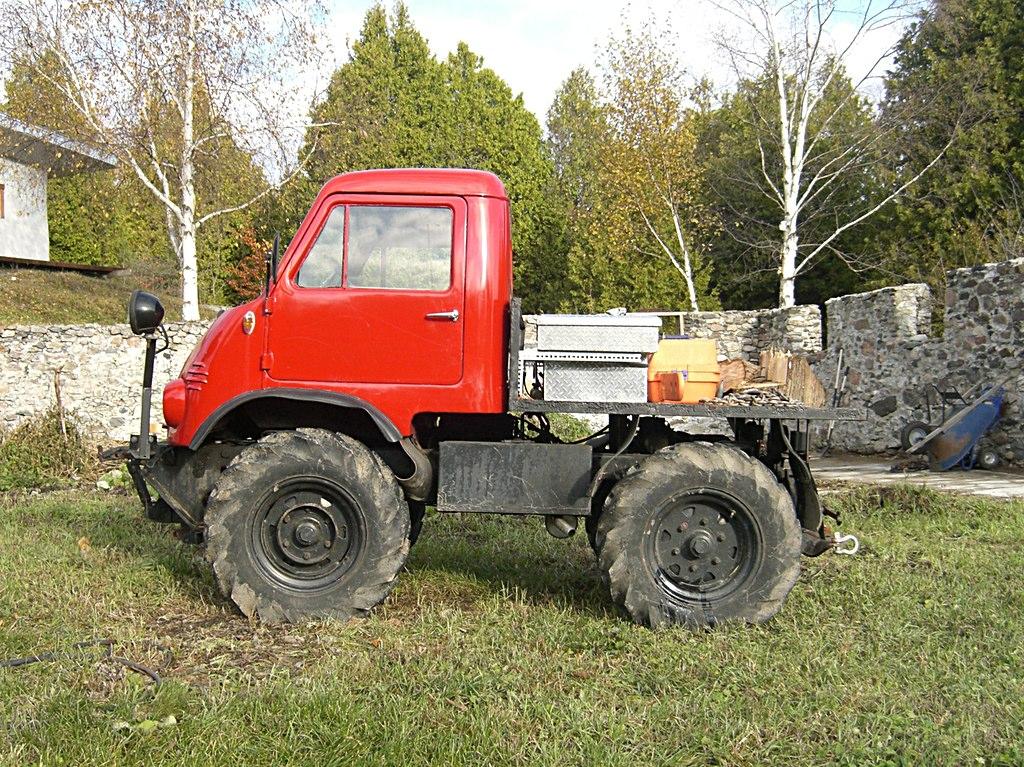 We’ve known for a while that our work horse ‘93 Nissan Pathfinder was approaching the end of it’s useful life. The exhaust system is wrecked, the brakes leak, and it isn’t capable of getting into the gnarlier parts of our property. It was useful for logging out the edges of the forest, but it’s both too big and not capable enough to make it into some of the more dense bush on the property. We’d have to invest thousands of dollars in repairs, tires, and a winch to make it useful again. So about a year ago we started researching various vehicles looking for a multi-use vehicle that could help us with logging, plowing our driveway, lowering our wind turbine, and collecting maple sap (yes, we’re making maple syrup this spring). We looked at full and mid-size pickups, 4 wheelers, side-by-sides, and then I stumbled upon Unimogs.

One year later we have purchased a 1953 Unimog 401 hard-top. It has a 25hp diesel engine, a 7500/lb winch and a snowplow. The machine is 10’ long, 7’ wide, and 7’ tall without the plow. The plow adds nearly 3’ to the length. The gearing on the Unimog is very low, in 1st gear it has a top speed under 5 km/h, 2nd takes you to nearly 10 km/h. Its top speed is about 50 km/h in 6th gear downhill with a tail-wind. With it’s big agricultural tires, massive ground clearance and low gearing we’ve been able to get to parts of the land that were completely inaccessible except by foot.

The lights are on stalks so they can project over the plow. The large black box between the wheels holds the battery.

On the front you can see the hydraulics for the plow. The round grated part inside the front hub is meant to be a step. Not surprisingly these ‘mogs are often called “frog eyed”.

We added a truck box for storage. The wedges are used as wheel chocks when using the winch.

The winch is an original Werner, 7500/lb winch driven by the PTO. The wrench is our lever, up is forward, middle is neutral, down is brake. It has ~ 50’ of 7/16” steel cable on it but we’ve ordered 100’ of 7/16” synthetic winch rope. It’s stronger and safer than the cable. We’ll be having a fair-lead custom made to fit the drum.

It’s an OM636 Mercedes diesel engine producing 25hp. Despite how cramped the engine compartment looks it’s quite easy to work on. Needs a good dose of degreaser.

The cabin is a tight fit to say the least. I can just barely get my legs under the steering wheel. The seats are all the way back but the machine is very easy to drive, though it’s loud, hot and very noisy.

From top to bottom: Forward/Neutral/Reverse lever, gear shift lever, PTO engage lever, emergency brake, 2WD/4WD/4WD lock hubs lever. Reverse only works in 1st and 2nd gear. 3rd gear is the start of high range, 4th - 6th are only accessible from 3rd. Below the levers you can see the plow hydraulic controls.

The hand throttle allows you to set engine revs without using the foot pedal, it’s mostly used for setting an idle speed and controlling the take-up speed for the winch. Yes, that’s the coolant reservoir up on the dash.