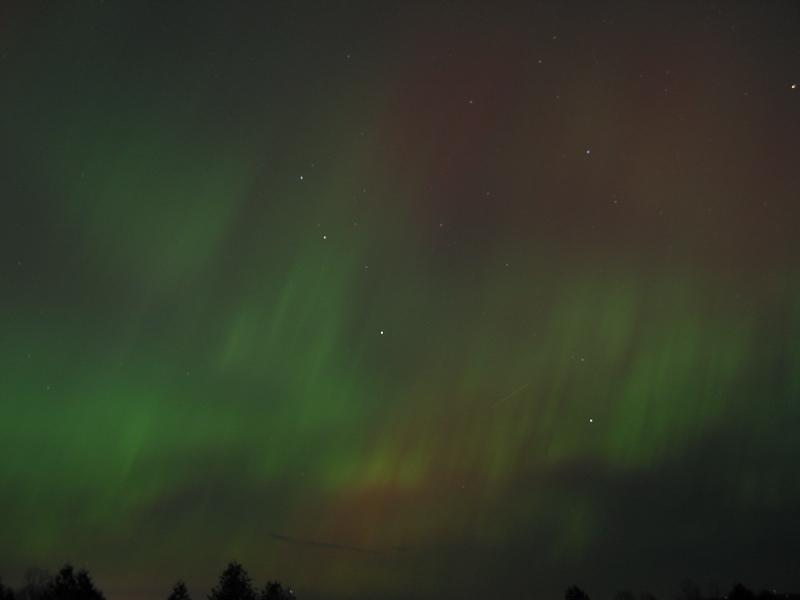 Last night as I let the dogs out I noticed lovely shimmering curtains of colour in the sky. The Northern Lights were out. It’s only the second time on my life that I have seen them, and I got out my camera and tripod to take some pictures. These were mostly greens, with a touch of orange. Last year we got to see reds, which only occur at very high altitude and are rare.

Another benefit to living in the country, the light pollution is so bad in cities that few people ever get a chance to see the Northern Lights. 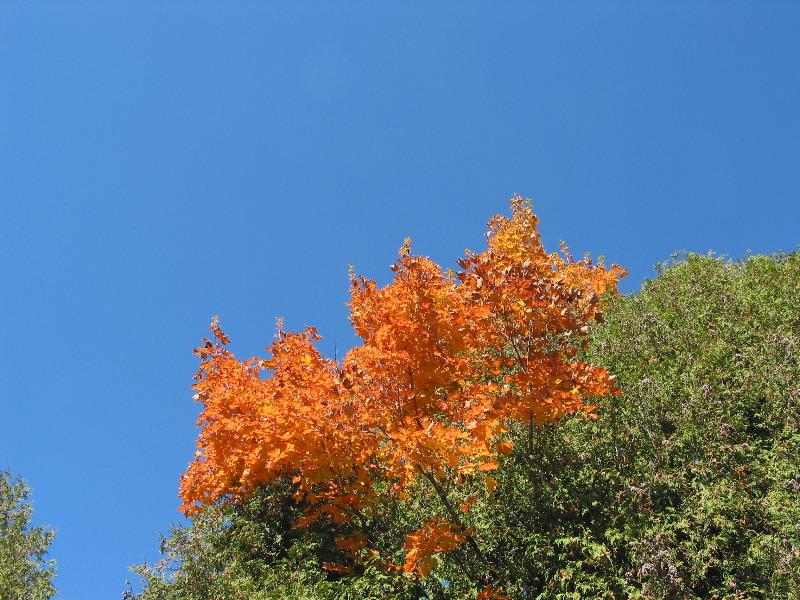 Last week while Joanne was out and about she took some really nice pictures of the land and the fall colours.

I had planned to post them, but then I got sort of sidetracked…

So here they are, if you look in the third picture you can see the wild turkeys back out in the field. 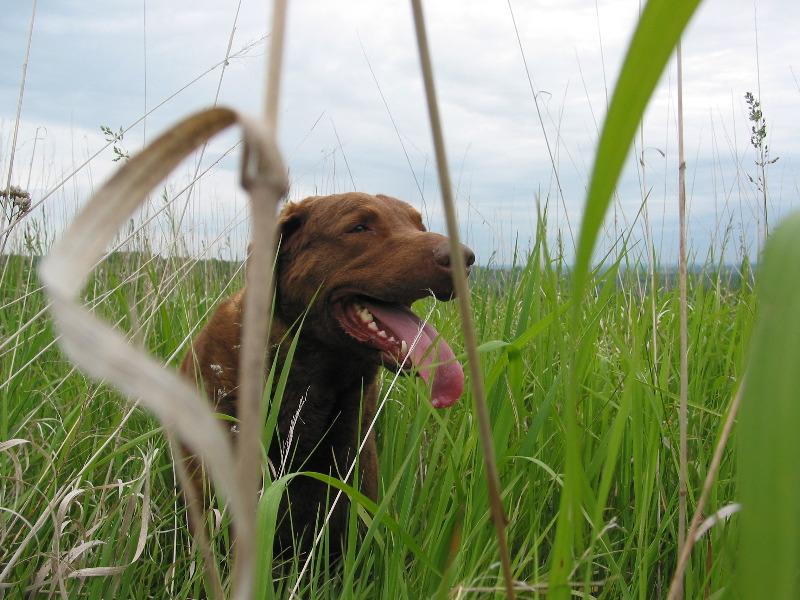 Spent the day working on a job for a client, but still ran into the back room every hour to check on the wind generator, batteries, and charger. For the first part of the day we had both sun and wind, but as of yet we still don’t really know how much power we’re getting off the wind generator at any given time. Dad hooked my multimeter up to the DC outputs on the controller box so we can see how many volts we’re getting, the high was around 57VDC, and the average, seems to be in the 50VDC range. But it’s not just the volts that are important, it’s the watts, and both rise and fall according to the wind speed.

Took the dogs for a nice long walk around the land tonight, beautiful night, not too many bugs, and everything is green green green. ‘Course I just walked around looking up at the tower, ‘cause it’s the cool new toy.

Oh, and I took the camera. 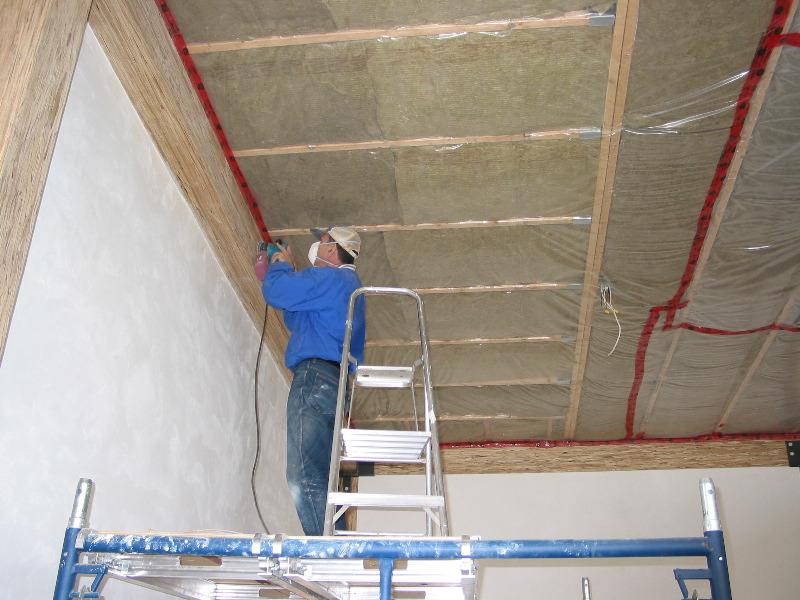 We have a dial-tone!! Just one line works, but it’s a start. In the end the problem had to be handed up to a higher order of technician - the so-called “Cable Guy”. He was utterly unlike Jim Carrey, but, as has become a tradition in this project, he knew our land. In fact he had hunted coyotes on our land and killed his first one in the south field. I did the nod and smile thing.

On the hunting vein, I ventured out to get some gas and came across two fellows parked in front of my property, both looking across my fields with binoculars. I stopped to ask them if they required any assistance (being such a helpful fellow). Apparently they’re just avid bird watchers, not hunters. No sir. Being a rude city person I proceeded (despite their protestations) to make it abundantly clear, in no uncertain terms, that they DID NOT have permission to hunt on my land. One of them finally asked, in a rather nasty tone, “Don’t you like hunters?” I like hunters just fine, I don’t like poachers, and anybody hunting my land without my permission is a poacher. I told them that there already was one fellow hunting the turkeys, and a crew hunting deer, people who had the decency to come up to the house, meet me, talk to me, and ASK PERMISSION. They shut up after that and I drove on. Sheesh.

On the drive back there was a white tailed deer just wandering up the road. I got within about 30 feet before she saw me and took off into the bush.

Just for Jeff,  here are the pictures… 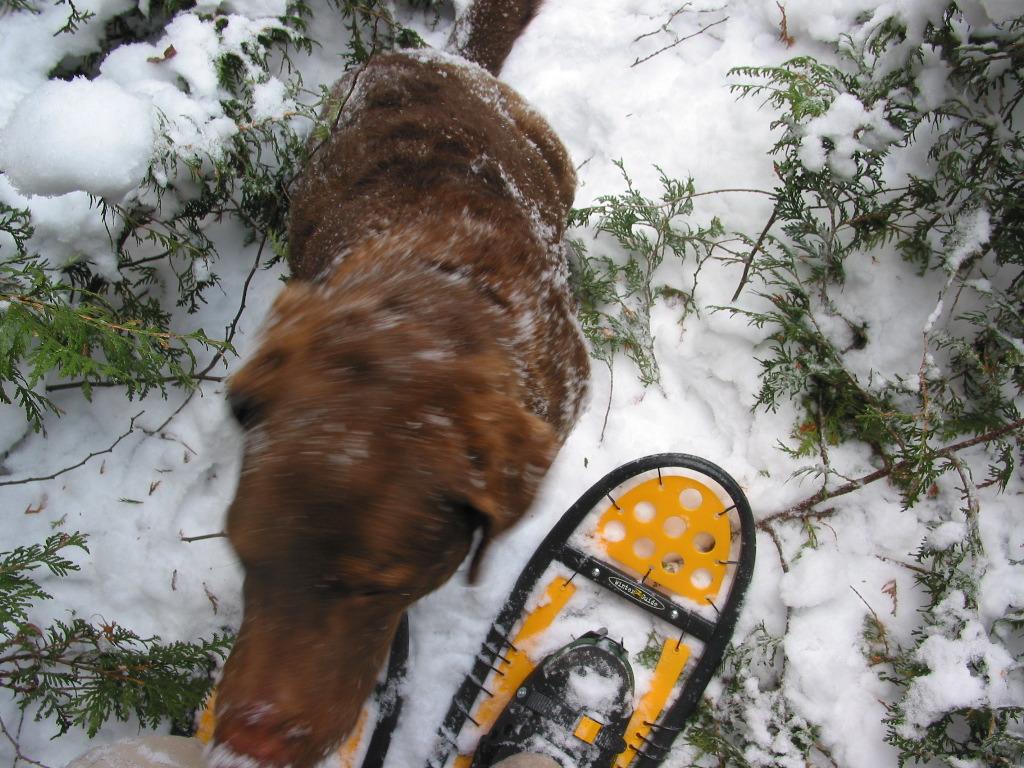 We didn’t work today. It was -21C this morning and since we Hunter’s value our various extremities we didn’t go down to the house today. Instead Dad and I drove into Peterborough and picked up his new 8” industrial joiner. And no, that has nothing to do with Canada relaxing its dope laws. The beast weighs 600 pounds; we managed to get the box into his garage, it may stay there for a while, neither Dad nor I could lift the main table.

It warmed up to -6C by the afternoon so I took the dogs to the land and we went for a nice long walk through the bush. I carried my camera with me and snapped a picture of anything that caught my fancy.

I also managed, somehow, to get quite lost on my own land. So lost in fact, that I ended up not on my land but on my neighbour’s. Once I figured out where south was I snowshoed my way back, and then we met the turkeys. Two of them, the dogs actually seemed to notice them for a change. Unfortunately (or possibly fortunately) you can’t exactly be stealthy in snowshoes and they were all ready high-tailing it before the dogs got close.