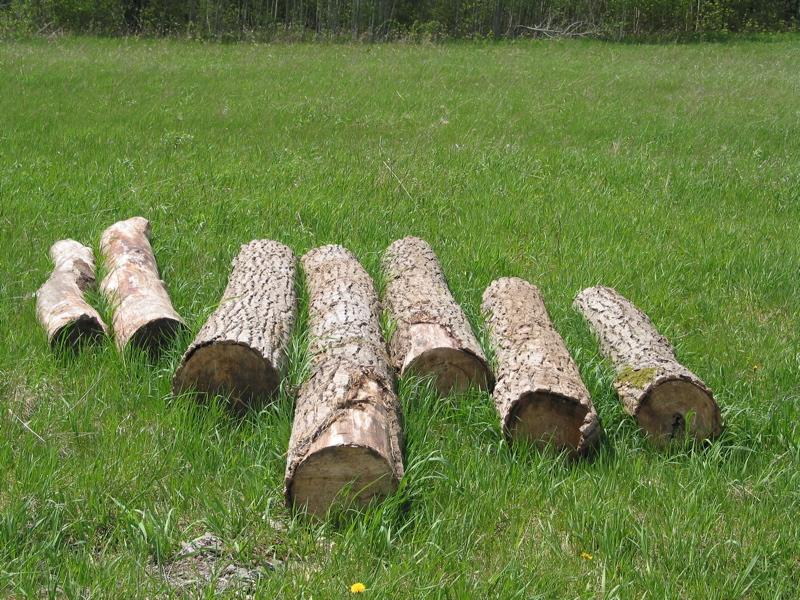 As much as possible we have tried to use wood off our own land inside the house. The inside and outside walls of the bathroom are cedar milled from trees on our land, as are the maple window and door frames.

Before we started the house we marked 102 trees and sold them to a logger. They had a big machine that carried out the logs, and that could navigate nearly anywhere. Before the job was over we traded them an additional ten maple trees in exchange for taking down and cutting into 12’ sections 6000 board feet of white cedar. White cedar are difficult trees to drop because their branches come directly off the trunk and run from the ground up. They can be very dangerous when they fall. The trees are also problematic because, unlike most hardwoods you can’t tell if the tree is any good until you’ve dropped it. White cedar, like Poplar, tend to rot from the inside out. We were very lucky, it turned out that most of the trees they cut were very good. The boards we got from those cedars built a deck on the back of Dad’s house, and most of the walls of his garage. It was the leftovers that went into our bathroom.

Over time, walking around the land, we started finding sections of trees that had been left in the bush. Good trees, on the sides of hills, in gullies, even out in the open. We pulled eleven oak and maple sections, all solid, at least 18” in diameter, and about 12’ long, out of the north west corner a couple of years ago. We had them milled and have just come to the end of the maple.

Recently Dad and I have managed to pull out two pieces of black cherry, five really nice pieces of ash, and a bunch of oak from the south east corner of the property. The main section of ash was 22’ long and 18” in diameter and had fallen across a small gully with a creek in the bottom. There were tracks from the logger’s big machine but they couldn’t seem to get close enough to grab the logs. We pulled them up from the other direction, up a very steep hill using a pulley and my truck. While we were down there we found two more pieces of ash and several sections of oak. We’re also going to drop a couple of cedars from the same area.

In addition to this wood we’ve also cut up and dragged out two poplar trees that were solid, but had blown down in a wind storm. We’ve also been marking and dropping cedars from other parts of the land. The various hardwoods we’re going to cut up into 1” planks, possibly for use on our ceilings. The cedar we’re going to cut into 2” stock that will be used to build decks on the south and east sides of the house.

Four of the cedar trees that we took down were just below the house near where we park the cars. They were taller than any of the trees around them and spoiled the view to the south east. With them gone the whole view from the front door is greatly improved. How much? Well check the pictures and see for yourself.