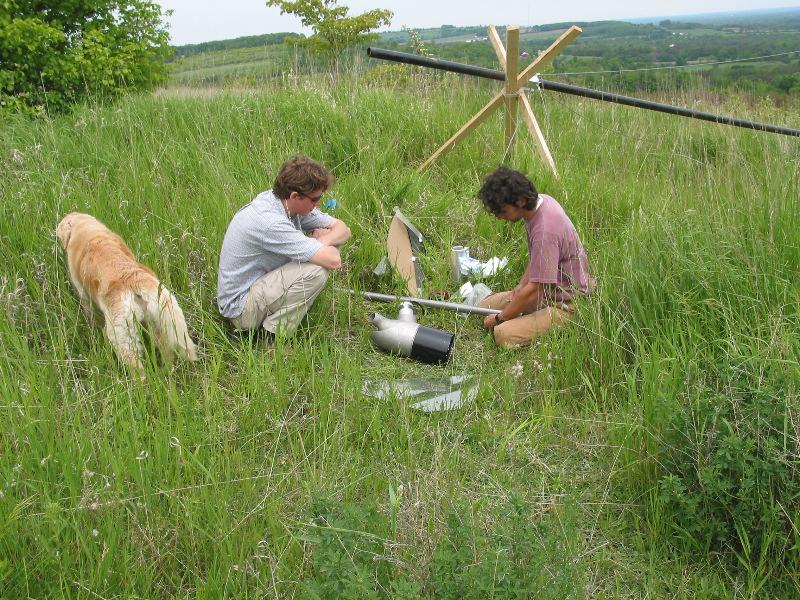 It’s up. J.P. flipped the switch at 5:00pm last evening and we started generating power. There wasn’t really much wind, so we weren’t generating very much power, but it was very gratifying none-the-less. We got a bit more wind later that night and I stood outside for a while, and when it’s really spinning you can just barely hear the turbine down at the house. Unfortunately there is no meter of any sort on the wind generator controller box in the house so I have ordered a separate meter to track the wind power.

The cable that runs from the tower to the house has three 2 guage aluminum wires: a positive, negative, and neutral line, each consisting of five strands. The entire cable is about 1” in diameter. Dad and Simon set the spool (of 650’) up on blocks so that it could unwind as they pulled. Then the dragged the cable through the bush behind the house, across the little valley, and up the steepest part of the back hill. I helped for the last little bit, then helped pull an extra twenty feet through from the house. Seriously hard work. We had exactly enough wire, barely a foot to spare. When Eric comes to put in the septic bed (next week) he’s going to bury the cable.

While Dad and Simon ran the cable, J.P., Jason, and I made some adjustments to the tower. Two of our anchors weren’t lined up properly and we needed to add an adjustable turnbuckle to allow us to drop the tower, when the lines are tensioned. By the time we had that done Simon and Dad were back and we all started working on attaching the generator, running the wire up the tower, and attaching the junction box at the bottom of the tower.

While we raised the tower, Dad and Simon went back down to the house and started working on the inside wiring. And then the yell came from below: “Turn off the brake!”