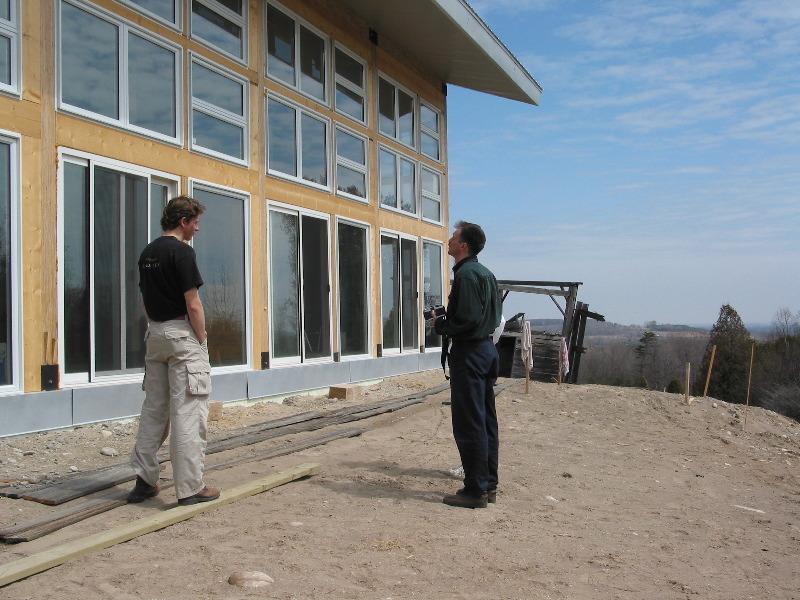 Who was that masked man?

Joanne here - a new voice. We had a few more visitors this weekend.  On Saturday the president of Thermotech Windows stopped by to take a look and get some pictures. We had broken a lever on one of our front casements and he brought a replacement. He said he’d keep our spare window in mind and suggested we post it here. Window anyone?

Mike the roofer also stopped by to check out the completed soffits and discuss eavestroughes. We didn’t work on Sunday - family event at Aunt Joan’s. On Monday we were back up and were joined by Nick (my dad) who came all the way from Grimsby and spent the day sanding the big double beams in the gallery. I finally got a few pictures since I stupidly missed getting any pictures at the beginning of February when he and Anna (my mom) came to visit. We didn’t even do a blog entry that time! They came all the way from Grimsby, helped out, and we went out for a wonderful dinner for Glen’s birthday and there has been no record of it. It’s been bugging me since then so I’m happy to have finally put it in the blog.

Glen and his dad were working on the bathroom. Today they got the glass in the doors which means we really have a usable bathroom now! Donna and I applied another coat of urethane to the outside bathroom walls and doors. Then I started sanding the posts with 120 grit—I got five done, only twenty-three to go.

At the end of the day Ian showed up, he hasn’t been out here for a couple of months so he was seeing some big changes. Later this week Glen’s cousins Phil and Steve are coming out, Phil to work and Steve to visit (I’m not sure that Steve’s all that handy). The plumber’s supposed to be out tomorrow or Wednesday to fix a few problems. When that is done we can put up the drywall in the kitchen and back bathroom.

Next entry: Rainy day, dream away