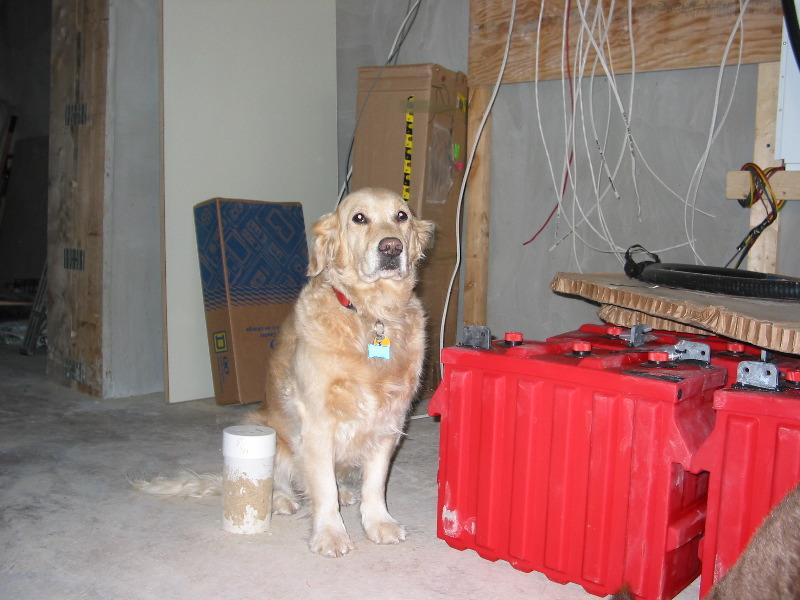 Today when I left the house, I walked out the front door and locked it behind me. That felt so cool.

By the way it was minus 19 degrees Celsius outside today, keep that in mind. Minus one million with the wind chill. Man it was cold in the wind.

We have water. The pump is in the well, the line is run into the house and into the pressure tank. Yesterday Dan installed the boiler, it just needs the gas hookup and we could have warm floors. The gas will be installed early next week, the guys showed up this morning but they were completely unprepared for the job, they had been misinformed back at the shop about what they had to do at our place.

So here’s the scenario, Eric dug a trench with the backhoe, breaking through the frost from the well to the house at a depth of about five feet. We had left a piece of Big-O pipe through the foundation into the back room to run the water lines. Andrew ran the lines in, we back-filled the trench and Andrew connected the pump and dropped it down the well. That took almost all day. Andrew will come back later when the heating is in to finish the rest of the plumbing. While Andrew dropped the pump, Eric graded around the front of the house, the grade is almost at the right level.

Even though it was so cold today the sun was out all day long. I’m pleased to report that the windows worked quite well. By the time I left at 4pm it was -18C and inside it was -4C. If you stood in front of the windows you could actually feel it warming you. Very cool.

My new hat might be goofy, but it is damn warm. 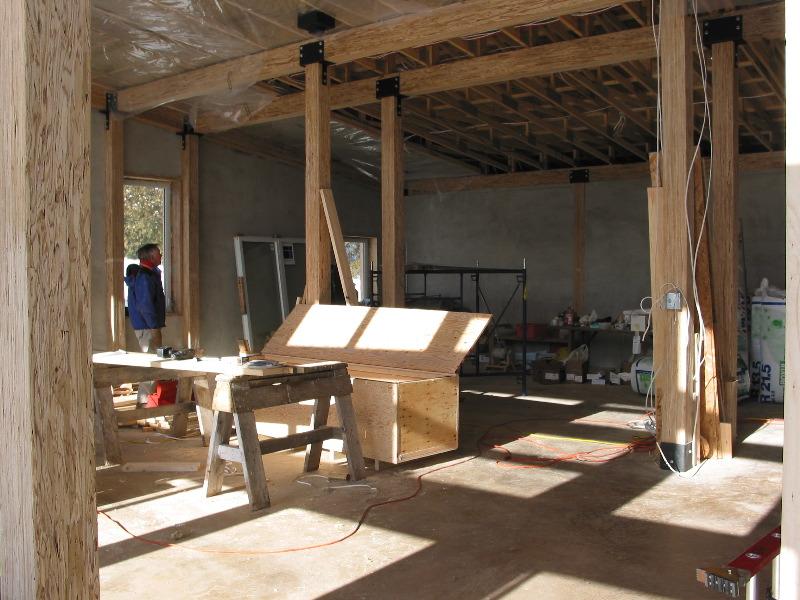 Ever since the farmers took the corn harvest off we’ve had all sorts of critters out eating what’s left. The porcupine’s been out a bunch, we see deer, rabbit, and coyote tracks all the time, but the most interesting animals (for us) have to be the wild turkeys. They usually travel in a flock of about 30-40 birds, they really do gobble if you get too close, and they are BIG. The big males are taller and wider than Gator. If they’re across the road when you drive in they’ll run along ahead of you for quite a distance before peeling off into the field, and if you split the flock on either side of the road the birds to the south will get very very agitated trying to get back with their friends. Their tracks are really cool, they look exactly like giant chicken tracks, so all you can think when you come across them in the bush is that Foghorn Leghorn is going to step out from behind a tree. The turkeys were out this morning.

We had another busy day, Mom and Rene continued with insulation, Dad finished the battery box, Joanne sanded and I continued with the wiring. The insulation and vapour barrier should be done next week. I got almost all of the wiring done, there’s just one small circuit left, and Dad can take care of that. With any luck we’ll have the water and propane hooked up next week, and the week after we’ll have electricity and radiant heat. Now that would be exciting!

Today was the first sunny day that we’ve had in a very long time and it was wonderful, the thermometer only showed it as 1.5 degrees warmer inside than out but if you were working near the windows it was a lot warmer than that. The sun penetrates the house almost to the back wall. We laid out some old carpets to try and catch some of the snow that inevitably gets tracked in, Ceara spent most of the day curled up in the sun in front of the windows, she didn’t get too cold today.

It was a good day. 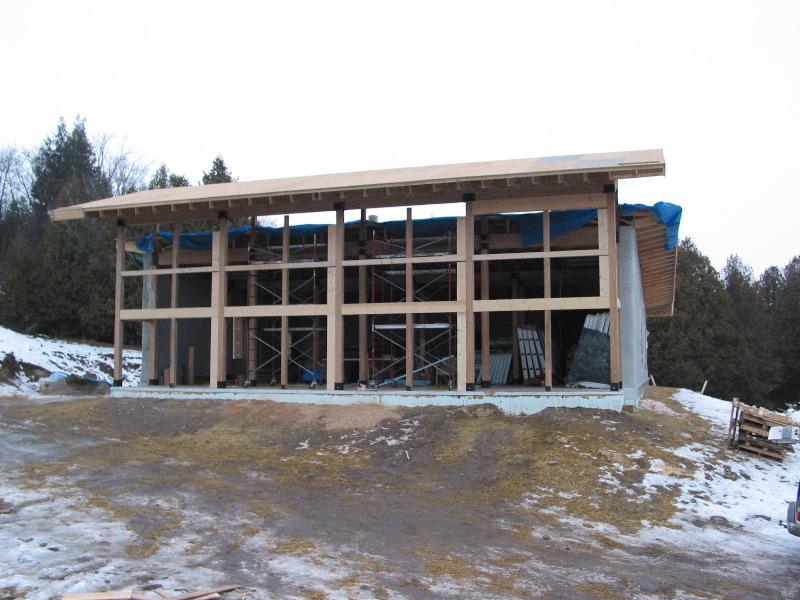 The windows came today and there were only two errors. We ordered an extra window for the back corner that was somehow left off of the original order but the window that came was way too small. So it went back and the window people are sending out a replacement ASAP. The second problem is one of those annoying things that seems to happen all to often when you are building a house, I relate it here as a tale of warning.

When we ordered the windows we sent off our list of sizes to the manufacturer and they sent back a quote along with their list of sizes, since most manufacturers have standard sizes. Now ordering windows turns out to be more complicated than you might think, there are issues with window size vs rough opening size, there’s the method of fastening the windows to the house, usually something called brick mold, and of course there’s the constant worry about the sizes. So we went back and forth a couple of times and dropped the doors because they were too expensive (we got solid wood doors in Western Red Cedar from another company). Being pretty paranoid I also sent a full set of plans off to the window company via courier so that they could double-check the sizes. When we had a final list of windows and a price we sent the list off to our architect to check over, to double check that all of the sizes were correct. He OK’d it, and we signed the agreement and sent off a deposit check.

Some months later, we’ve been delayed for any number of reasons, and we’re getting close to needing the windows so I decide to double check the list. I find out that we’re missing one window. So I call the salesman explain the problem, it’s really nobody’s fault, everybody missed it, and we get that squared away (that’s the window that came the wrong size, so we’ll get it squared away again).

At the opposite end of the house from the front doors is a window. Since this window is quite large, six feet wide and seven feet tall, it was broken into two panes, think of it as a set of french doors that don’t open. This is the only window like this. It is pretty expensive. Today when they delivered the windows, they delivered two of them.

When I looked at my list sure enough there were two listed. There is no other window like this yet the salesman, the architect, and myself all agreed to the list. And we have an extra, large, expensive window.

Here’s what I think happened: because the window has two panes when we looked at the drawings we assumed that the quantity referred to two windows, attached to one another. At least that’s what I hope I thought, ‘cause otherwise it’s a pretty dumb mistake. It’s also possible that we looked at the window size, looked at the plans and when they all agreed we never really paid attention to the quantity. Now, that said, I have no idea what the salesman was thinking since he had the plans and knew there were no other windows like that in the house. I don’t believe that he was being dishonest, but I can’t figure out how that window got duplicated on the price list.

Today, Dad and Rene got most of the filler boxes in on the front of the house, I got a couple of boards up, and then after the windows came Mom and I went off into Peterborough to look at wood stoves. They are much more expensive than I expected. I think we’ll be doing without one for this winter and hoping the passive solar works.

The distance shots of the house were taken from the top of the large hill to the east of the building site. 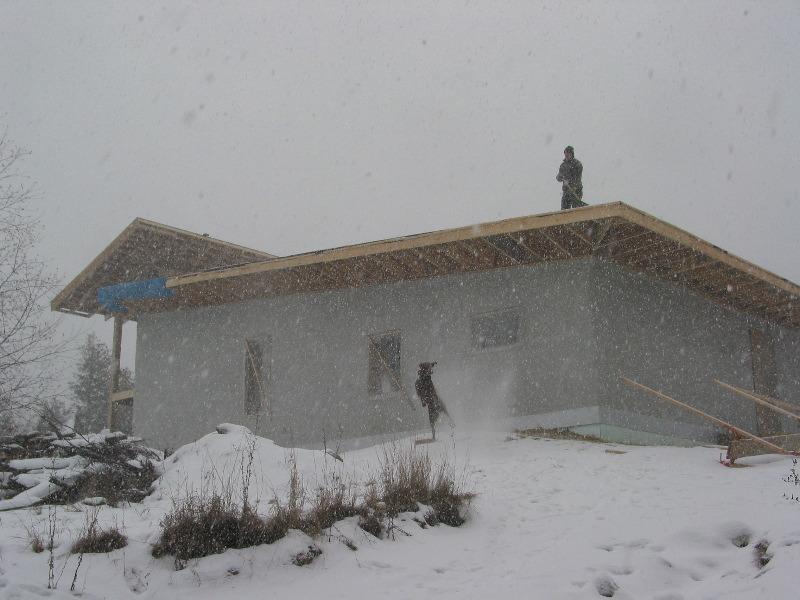 We’re still busy trying to get everything ready for the windows and roof. Both of which are supposed to be installed on the 16th of December. Rene and I got the last two pieces of plywood down on the roof this morning and then he got to work on the insulation blocking and fascia board.

Dad was down below and he and I worked on the front window beams and posts. These posts and beams are not load bearing for the house but they do support all of the windows. Next week they’ll finish the fascia across the front of the cupola (Rene will be wearing his safety harness), plus the next set of beams, and the supports for the north windows. I don’t know where we’d be without my Dad.

On a very positive note the angle of the roof seems to be perfect for December sun entry into the house. At 11am this morning the sun was hitting the back (storage room) wall of the house. Here’s hoping that Paul got the angle right for June as well (no sun entering the house at all).

Enjoy the pictures of Gator leaping for shoveled snow. And more!