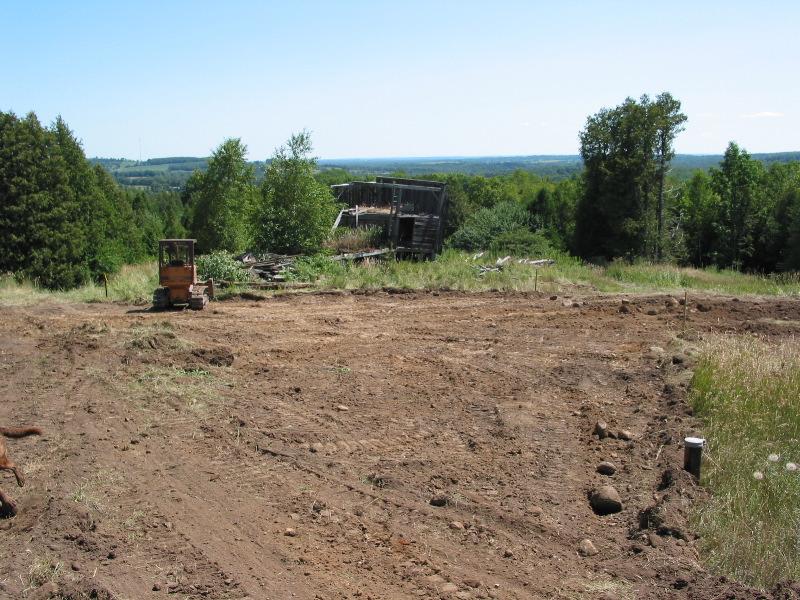 The House in Pictures

I’ve put together an overview in pictures of the house from the day we broke ground (August 2002) to when we moved in (May 2003).

I knew things were going too smoothly with Bell. But we’ll get to that.

Pete and Tina were in the house again, and I was helping them out with the stucco. We completed the living room wall and fixed cracks on some of the others. Tina spent some time scraping stucco off the posts and beams, they have a special tool that seems to be made for just that task.

Dad worked on the conduit, and we ran some cable from the mechanical room up across the back and through to the front part of the house. So we have all of the phone and electrical wire run around most of the front part of the house. Once we have a working phone line we’ll start connecting the various jacks. We’ve strung Cat-5 networking cable along the outer perimeter as well, but it is my intention to use 802.11 for my main networking needs.

So everybody left around 4:30pm, but I had to hang around because Bell was supposed to come and hook up my phone lines. I waited until 5:30pm and then I went back to my parents. No sooner had I sat down and started into my email than my cel rang. Of course it was the tech, and of course he wanted me to meet him at the house. So back I went, with some reheated lasagna and my book.

By 7:30pm there was still no sign of the tech, so I drove out to the road to look for him. I found him at the main box for the line, cursing. Seems there was no dial-tone and he couldn’t get a test pulse from our road box to the line box. That was the result of mis-numbering. With that resolved he had to wire from the road box to the house. They’d already run a line in alongside the driveway with 5 test boxes. The line had to be connected from box to box and then connected to the house. By the time he had wired the line from box to box to the house it was 9:00pm. He finally left at 10:00am, and I still didn’t have a dial tone. He said to call if I didn’t have a dial-tone by 2pm Thursday. 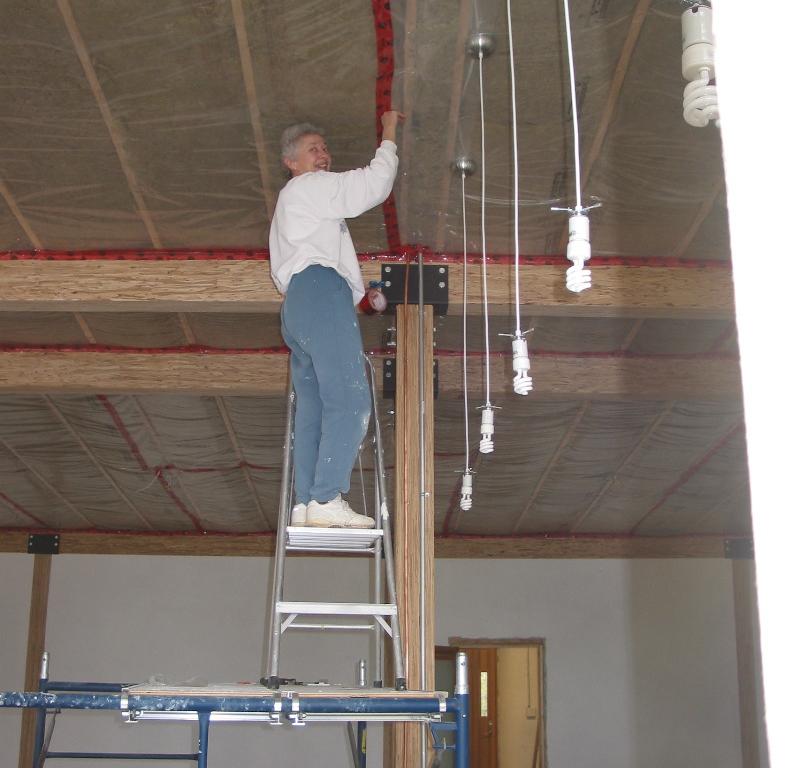 Mom finished the taping and priming. Dad worked on the conduit and wiring. I did a whole bunch of different stuff. Tomorrow Pete and Tina are back and we’ll get that last wall done. Bell comes tomorrow, we should have a working phone.

When I got in this morning the turkeys had surrounded the hill and were gobbling away like nobody’s business. I don’t know what the deal was but those turkeys were definately ticked off about something.

Maybe it was foreshadowing. We had an afternoon guest who would like to hunt the turkeys on our land. Turkey hunting facts: the season runs from April 25th to May 31st, each hunter may take a total of 2 birds for the whole season, wild turkeys are actually good eating. We also found out that somebody might already be hunting our land; apparently there are some guys who travel around in trucks, park on the road, walk across people’s land and leave. Hunting without permission is a problem up here, even though our land (and most land) is posted. The Morton’s have exclusive privileges during deer season, they’ve been instructed to chase anybody else off the land. Brent now has the same authority during turkey season. Oh, and he promised not to shoot towards the house, that was nice of him, dontcha think?

Basically I’m a Hunter by proxy. 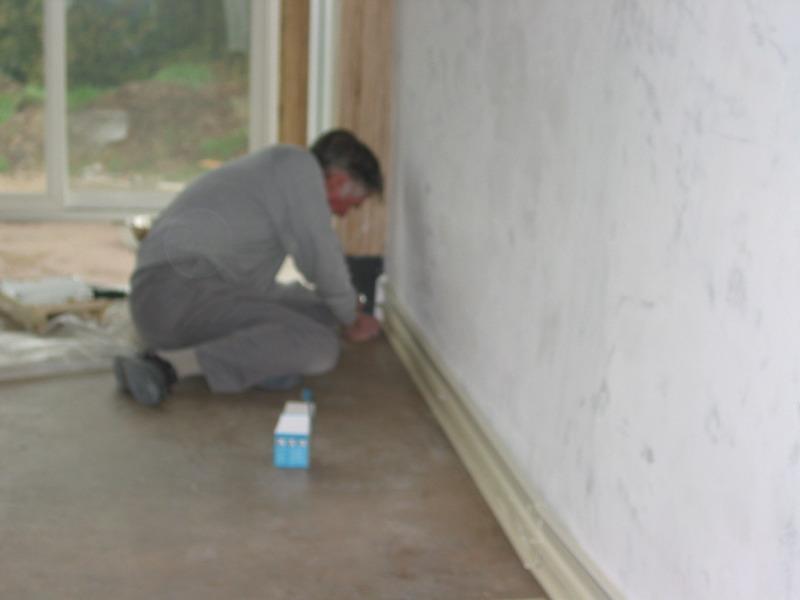 It rained most of the day. Which in our case is good and bad. Good because it made the house more humid which helps the stucco. We were getting some pretty bad cracking and crinkling on the freshly stucco’d walls, part of the reason for this could be that the walls are so dry that they are pulling the moisture out of the stucco mixture too quickly. Bad because we depend on the sun for our power.

The wall that we stucco’d yesterday had to get a re-coating of lime today to fill in the cracking and crazing. Pete and Tina went over the whole thing, Tina with her ‘jet pack’ soaking the wall down and Pete spreading the lime down super thin.

We got the back bathroom (storage room for now) primed and set up the grey shelves. That enabled us to clear out the back room and move the saw and other tools out of the front part of the house. Maybe now we can keep the level of dirt and sawdust down a bit in the front room. Two weeks to move date. 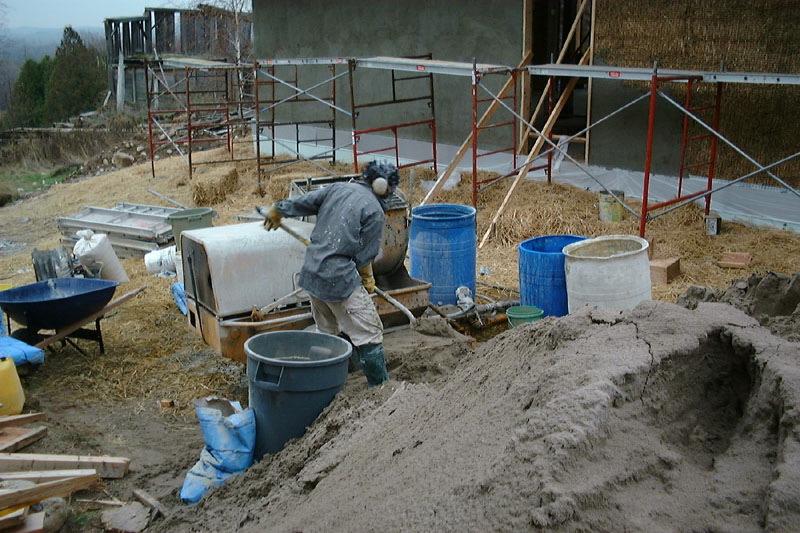 They got the first coat of plaster on the three outside walls today. Mom and Dad were pretty impressed with the whole process. They have this huge mixer and Tina runs the whole thing herself as the others take care of the plastering. 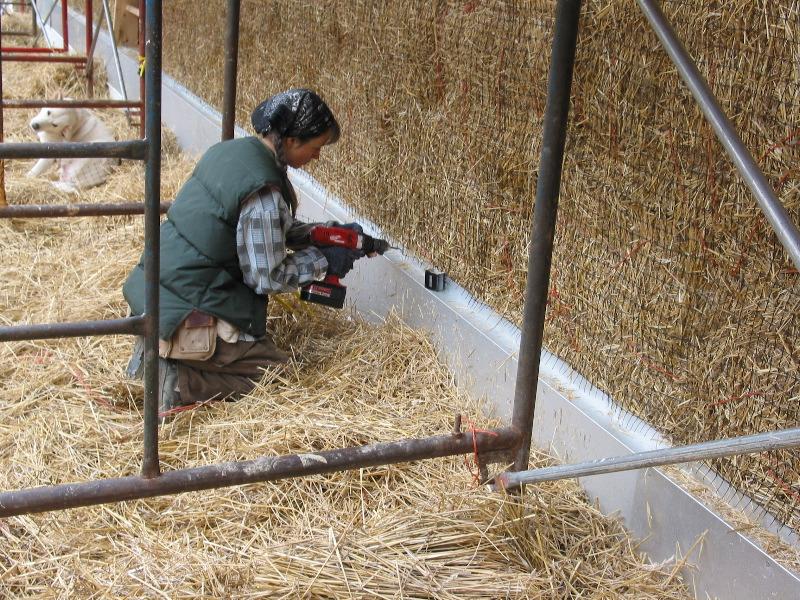 The Last Day (for me)

Today was my last day at the land, I’m posting this from the city. It’s been a wild 6 days, every joint in my body aches. That’s a lot of manual labour for a guy who’s used to sitting in front of a computer all day.

Today we finished up the west wall, Steve and my mom sewed the whole thing themselves. Rene finished up the insulation stops at the top of the trusses. Dad and I got some of the bale stops in for the inside walls and I restacked and covered over the bale pile. Pete and Tina worked on various odd jobs around the house getting it ready for stucco.

After lunch Tina went and got their big mixer, which was cool, but she also brought tarts! Good tarts. I’m seriously impressed with these straw bale people, they’re always cheerful and pleasant to be around, and they’re seriously concerned with doing a good job. If I could have them and Mike Cooper full time, I’d be a happy guy, and I’d sleep a heck of a lot better at night.

They start stuccoing tomorrow, hopefully dad will send some pictures. We’ll head back up this weekend to finish the inside walls. 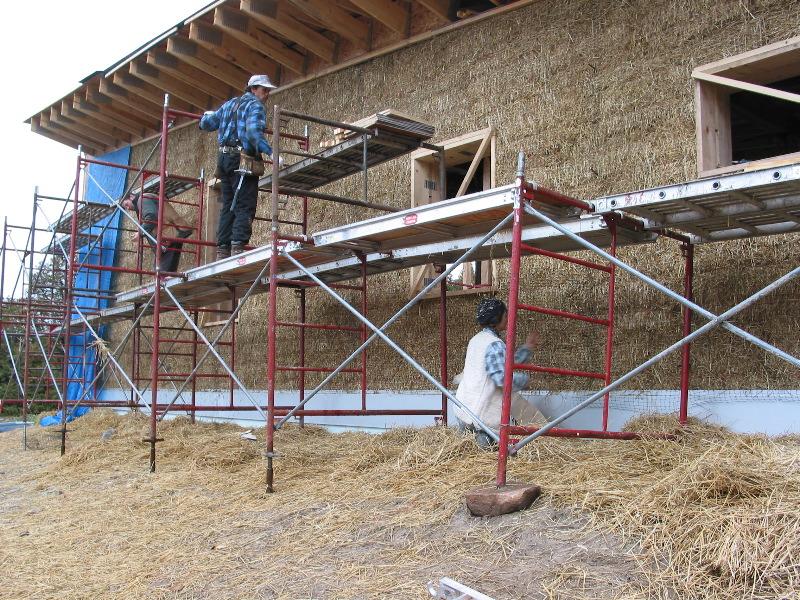 Same stuff as yesterday basically. We finished off the west wall, and we got most of the stuff laid out for the inside walls. Tomorrow we should be able to get the ice and water shield finished.

We had a huge thunderstorm last night. We had three bales in the west wall saturated, they had to be pulled and replaced. The east wall had some damage as well, we’re hoping that we can dry it out ourselves.

Wednesday I have to go back to the city and back to work. I need the break, there are barely any parts of my body that don’t ache. Five days of construction is more than this city boy is used to. 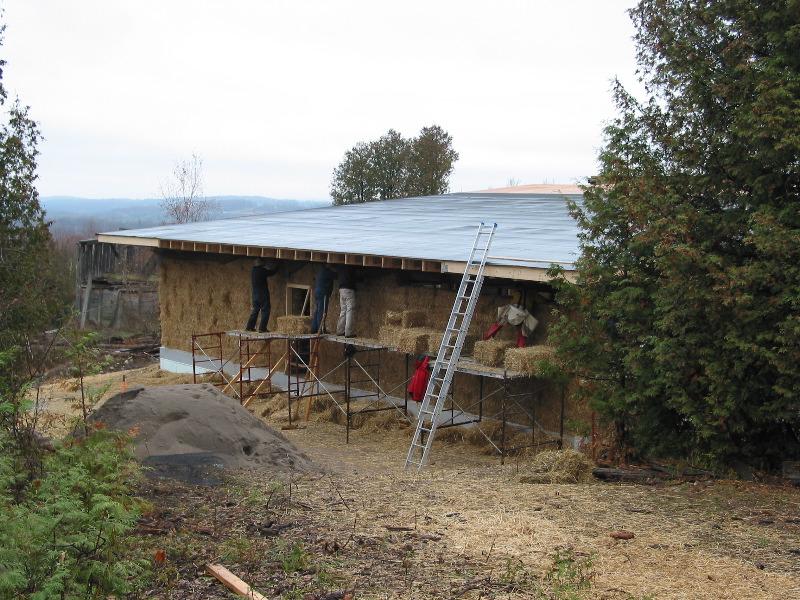 Well, we got to do a bunch more on the straw bale today. Mostly we worked inside stuffing holes with straw and stitching the inside mesh to the outside mesh. The rain broke briefly after lunch and we grabbed a bunch of bales and finished off the back wall.

I arrived at 8am with my father and with Mike, Mike’s son Ben, Dave, and Rene. We got a whole bunch more of the roof covered with ice and water shield until rain drove us off.

Unfortunately the rain got a bunch of our standing bales wet, we won’t know until tomorrow if they have to be pulled out of the wall or if they’re going to dry out.

Today Ian and Tiff came up again, Dana was there, my parents, two folks from Camel’s Back Steve and Andrew (both very cool), Rene, Joanne and myself.