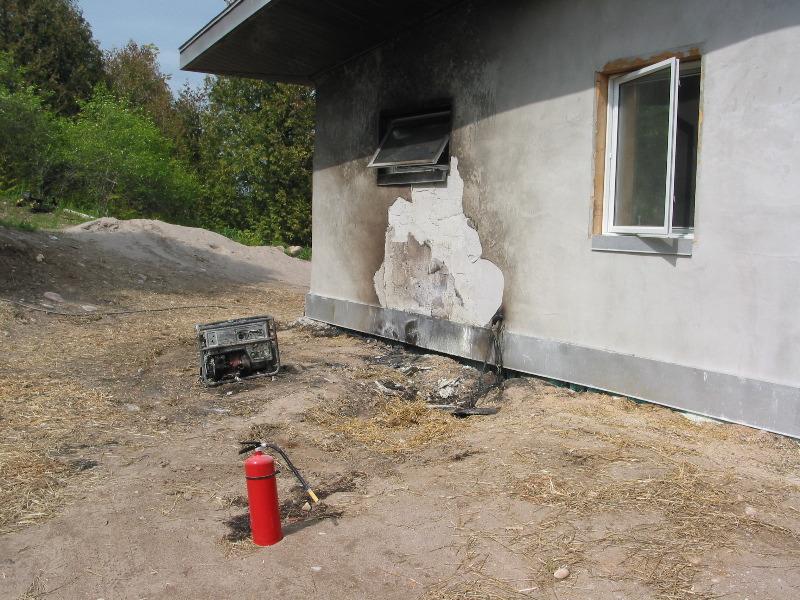 One of the concerns that people have about straw bale homes is the issue of fire. We can now address that concern with actual experience.

At about 3:00pm this afternoon, our generator, which rests on the ground under the eaves just outside the utility room, exploded. We have no idea why, Dad was on the other side of the house and heard it stop, he thought I’d turned it off, then a little later he heard a BOOM. Around that time I was out walking the dogs, I heard the boom and thought it was hunters, shooting near the house, I ran toward the house in a rage. Then I saw the smoke.

The generator was burning, flames were running up the stucco, engulfing the window and reaching up into the soffits. The ground all around the house is still littered with straw - why worry, it was gonna be buried next week - and some of it started to burn. Some nearby bales were smoking fiercely but weren’t actually burning. That’s generally what happens to bales, because they are densely packed they don’t burn, they smoulder.

I ran into the house, yelling, and grabbed a fire extinguisher, Dad was trying to hook up the hose. I aimed the extinguisher at the generator and let it rip. Then I sprayed up across the wall and over the window. The fire dropped considerably, but the gas tank blew. I ran inside looking for the other extinguisher. Passing Dad with the now spraying hose, I yelled at him that it was a gas fire and to concentrate on the straw. Running out with the second extinguisher I used half of it on the generator, and sprayed some on the wall just in case.

Dad was spraying the straw but the the water stopped. I grabbed a shovel and sort of dragged and rolled the generator away from the wall. Then we started shovelling burning straw away from the house. When Dad and I tried to drag the bales away they broke up, then they started to burn. Once the sheaves are loose they burn quite well. We got them well away from the house and shovelled sand over the sheaves to smother them.

In the end the generator is toast, we lost one layer of outside stucco, the window blew, the soffits are bent and damaged but the wall is perfectly sound and there is no structural damage of any sort. If it had been a stick frame house…. I’d rather not think about what could have happened. We also lost our phone lines and something is wrong with the pump.

I cannot describe the sensation of seeing part of your house engulfed in flames, just four days after you’ve moved in. I was shaking for a half hour afterwards, just coming off the adrenaline.

Once I calmed down, I went and took some pictures.

Next entry: No more safety net