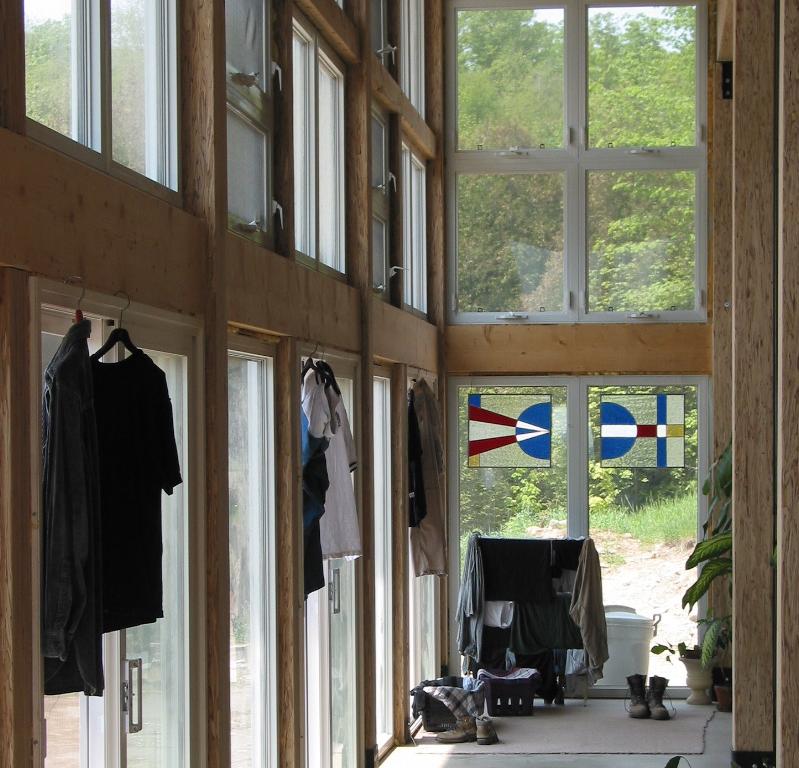 We’ve got our phone and water (thanks Simon!!) back. The phone line was fixed with a quick underground splice, and Simon fixed the pump by turning it off, and then on again. Which, I would like it noted, Dad and I both did several times over the previous 24 hours, but apparently not with the years of experience, and skill that Simon alone possesses. Now we’re coming to terms with having to keep a very close eye on our energy consumption since we don’t have a generator to fall back on anymore.

Yesterday was pretty interesting, since it had been cloudy the day before, and yesterday was cloudy and rainy, our battery voltage was dropping slowly as the day wore on. We had friends over and with just the iPod and stereo running we were drawing one or two amps. But for most of the day we were only producing

two amps from the solar panels. By dinner time the battery voltage had dropped down to about 46.5 volts. Our low voltage cut off is at 43 volts, that’s when the inverter shuts down to protect the batteries from damage due to excessive discharge. 43 volts is a pretty big buffer zone, and we could probably let it drop down to 40 before we did any damage to the batteries, but while we learn I prefer to play it safe.

We got through the night, and woke to a beautiful sunny day. Right now the batteries are charging at 8 amps and we’re up to 50.5 volts of charge (full charge is around 54 volts). We’ve also done two loads of laundry, which we felt safe doing, since it’s supposed to be sunny for the next three days. Since we have no dryer it’s all hanging in the gallery to dry. At this time of year our peak electrical production time is between 10:30am and 3:30pm. In that period we seem to hold a steady 8-10 amps depending on haze. Our record so far is 11 amps, but that was on a super cold February day, with a piercingly clear blue sky. In February you only get about four hours of useful sunshine, total, so that peak is pretty short term.

Right now the solar hot water system is also running full tilt, and the return water temperature is 70C (170F). More than hot enough for domestic hot water. We’ve noticed that the boiler rarely comes on anymore, even though it’s still restricted to only operating every other hour. I’ve set the thermostats down to 15C so the radiant floor system will only come on if it gets fairly chilly.

We’ve got all of the computers, appliances, and stereo on switched power bars. The problem with all of these devices in an off-grid home is that they present phantom loads of one sort or another. What does that mean? Well many appliances, VCRs, stoves, microwaves, etc, have clocks built into them, these clocks are always on, and always draw a little power. TVs have electronics to keep the picture tube pre-heated, this makes the TV come on quicker when you push the ON button, the same circuitry exists some of my stereo components. Individually these loads are very small, but when you add them all together they are much more significant, they also conspire to keep the inverter out of search mode. When the inverter is on it uses about 10 watts.

But the big surprise for us the the sheer number of things that we own that require chargers. Cordless phone, iPod, digital camera, laptop, cordless tools, cellphone… yikes!! So when we woke up today I plugged in all the chargers to get everything topped up. The benefit to all these devices of course, is that yesterday I could use my computer, and tools without effecting the batteries. The cordless phone though, is a write-off. It doesn’t seem to hold any kind of charge, so my original idea of just plugging it in when the phone rings doesn’t work. This is a problem because we only have one working corded phone, so when it rings you have to jog to that one phone.

On Friday the insurance adjuster came out with two contractors to look at the damage done by the generator. They’re going to replace the soffits, plaster, window, flashing, window bucks, and the portion of the ICF foam that melted, but they are not going to replace the generator (I’m not sure why, I’m going to get that clarified). We will be approaching the manufacturer because the beast is still under warranty, but I just have a feeling that an excuse will be made not to warranty it. We certainly can’t afford to buy another right now, so we really will be flying without a net. And you know what? I’m kind of excited at the idea.

Next entry: The Tower Part One: Erection