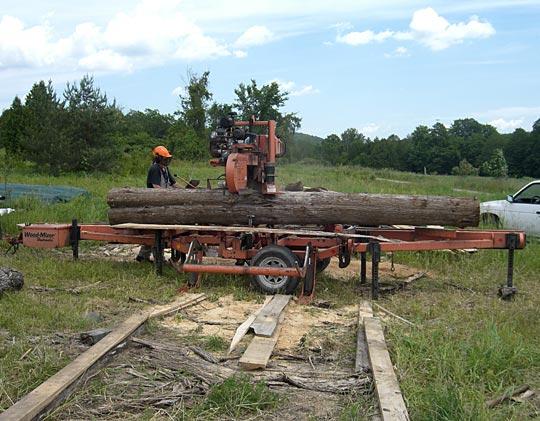 Spring and summer have been busy around the house. The bench is complete except for finishing. I haven’t decided yet what kind of finish I want to use on the bench yet, though I’m leaning towards Tried and True Linseed Oil and Beeswax finish as I love the depth and glow it gives to wood. Danish oil seems to be the traditional choice.

I had to disassemble the twin screw vise and re-install it, but that was expected. It’s very finicky to install correctly even when you follow the instructions to the letter. There’s still a bit of stiffness in the last inch of travel but I’ll probably leave it as is for a while and see if any other problems develop before taking it apart again. The rear vise jaws are secured to the bench with 5” bolts threaded right into the bench top. The front jaw, just like the end vise chop, is a piece of spalted Maple from a tree off our land.

We also had the portable saw mill in to mill the logs that I mentioned back in April. Of the thirty-eight logs only two proved to be rotten so we got away pretty lucky with storing them for so long.

Unfortunately some of what we had thought was Maple when we cut it in the winter turned out to be Basswood. On the other hand some of the Bassword was very nice. In particular we flitch cut the crotch of the tree and found some gorgeous grain and colour which is uncommon in Basswood which is normally very clear and white.

We’ll stack and sticker the wood through the summer and hopefully the Ash will be dry enough to go into the kiln this fall. My goal for this fall/winter is to get the ceiling done.

Next entry: The new deck