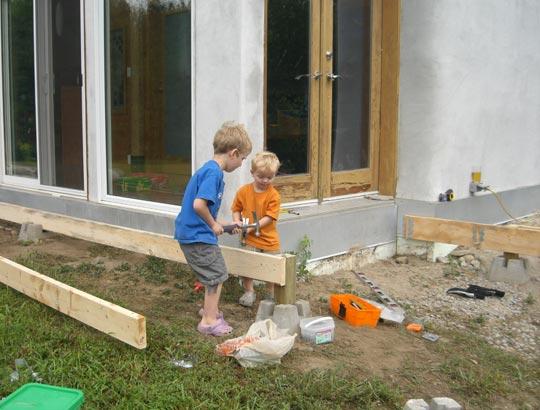 Long time readers might recall a post I wrote back in April of 2005 talking about milling cedar and the fabulous decks that would be built. I’m pleased to report that construction has finally begun on the east decks, including a new deck directly off the front door.

This deck is a team effort, unfortunately I have to spend as much time trying to keep the kids on my team as I do building the deck. It takes only a matter of seconds for them to not only form their own team but for that team to splinter into two entirely separate (and warring) factions. Things degenerate rapidly at that point. So as a result both children are gradually accumulating their own tool sets and each has a simple task that they must perform in order to “help” me. For example both travel with a handful of 3 1/2” screws that each gets to hand me in turn as I screw down the decking. Both kids help me measure the deck (each with his personal dollar store tape measure natch) which lends an interesting twist to the old saw “measure twice, cut once” since neither can actually read a tape measure.

I have noticed that they are doubly helpful when they are wearing superhero pyjamas.

It’s all worth it when you get a section done and the kids are so proud that they helped build the deck.