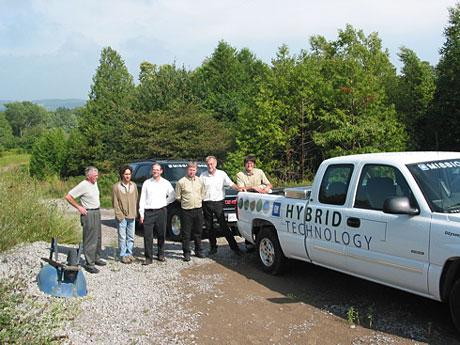 I wanted to wait to post this until after Garry had his update done on the Mission Green site so that I didn’t “scoop” him. It’s a nice article with some really nice pictures, obviously the secret to good interior shots is to take them when it’s raining outside.

Around 2pm, right as a huge thunderstorm hit, the convoy rolled up. I grabbed all of our umbrellas and headed out to greet everybody. Once safely inside we gathered in the front and Garry told everyone about Mission Green and some of the goals they hoped to achieve, and a bit about his own history.

With that squared away he proceeded to ask a series of well thought out and focused questions about all aspects of the house. I highlight that because I get asked a lot of stupid questions about the house and so it’s a pleasure to answer smart ones. Let that be a warning to you if you’re coming on the House Tour! Not a single one of them cracked a Three Little Pigs joke, they were a class act. Pete Mack and Simon Boone were there as well and both had to field questions on the off-grid system and the straw bale structure.

After touring around the house we headed outside to check out the trucks. We largely ignored the big Yukon SUV since the only difference between it and the regular one is that its engine has been tweaked to run the special 85% pure cellulose ethanol made by Iogen. Nice, and certainly a very definate improvement to what would normally be a very non-Green vehicle. But what really interested all of us rural geeks was the hybrid Silverado pickup. You can find out all you need on their site, I’m not a GM PR person, but the feature that really thrilled all of us was the two exterior 120V 15A outlets in the pickup bed. The truck can act as a generator, it has an inverter and will feed 120V off the batteries until they get low and then it will start the engine (!) to charge them back up! I wish we’d had that when we were building the house, no more listening to the generator idling all day.

All in all it was a very nice visit, I really enjoyed meeting Garry and his team, and I’m pleased and honoured that they chose to visit us.

Next entry: Check Us Out at Talk Energy