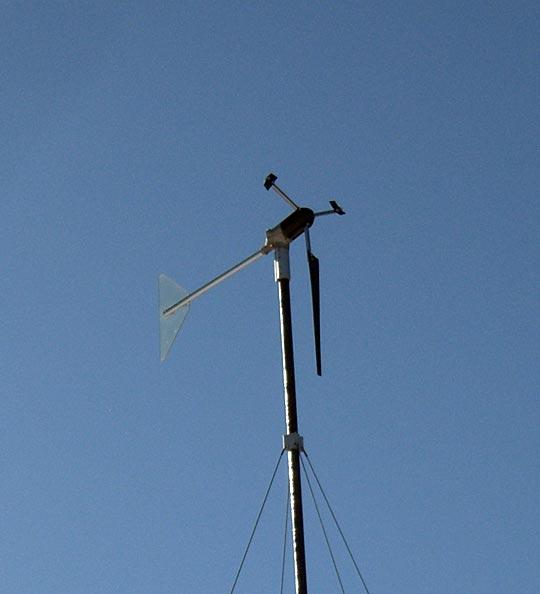 We went out this morning to play in the snow (more on that later) and we could hear a strange rattling noise. Things are usually pretty quiet around our house and the sound was coming from the north, which is very unusual because there is nothing but fields behind us for quite a distance. It turns out that the strange noise was coming from our wind generator which had thrown two blades sometime early this morning.

I’m not sure how this happened as it wasn’t particularly windy or cold or this morning. When I got up around 6am we were producing around 10A of power from the wind generator so I can only assume that it still had three blades.

Anyway I tripped the brake on the wind genny charge controller which slowed it somewhat then climbed the back hill to trip the main brake which is located in a sealed box at the base of the tower. That brake shorts out the leads and causes the turbine to stop.

Once that was done I set about looking for the thrown blades. I found one quite near the base of the tower but the other is missing. Depending on how fast the turbine was spinning and what direction it was facing the blade could be very far away.

The biggest problem for us is that we make the bulk of our wind power in the spring. In fact we’ve had such a wonderful confluence of wind and sun for the last month and a half that we haven’t run the generator in ages. There’s so much snow in the back fields that it’ll be quite a while before we can get a truck up to the hill to lower the tower. Not to mention that the gin-pole is buried under nearly two feet of snow.