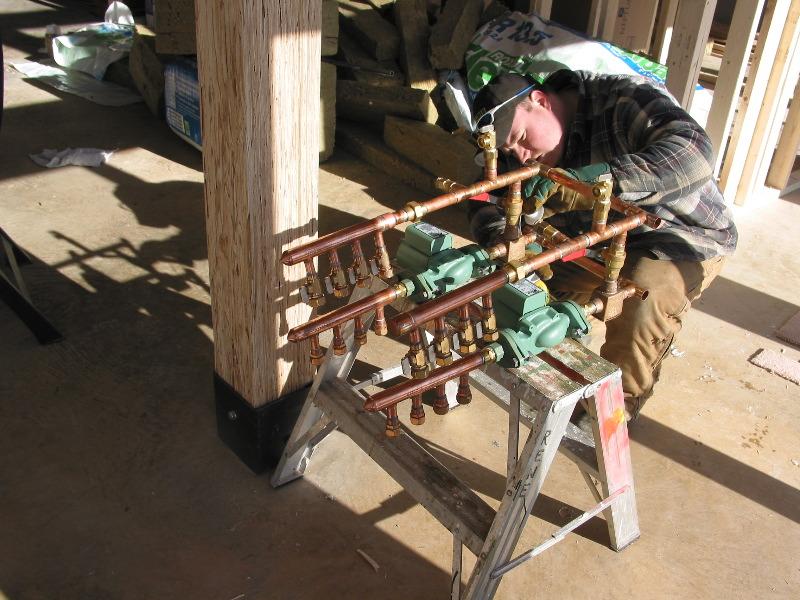 No Heat, plenty of Cold

I’m pleased to report that the passive solar design and the windows seem to be working. It was bitterly cold out today: -18C in the sun, -30C with the wind chill. You couldn’t take your gloves off outside for more than a few seconds. But inside the house the temperature climbed up to -3C, and that was without a good deal of the ceiling insulation. If we cold hold that heat in we’d be doing great. I took a picture of the thermometer after lunch. The windows certainly generate heat, they’re very warm when you stand near them, but until we get the house sealed up we won’t know how well they hold it in.

As for getting the heat turned on, too many things went wrong today. The propane guys came this morning and hooked up the vent, and they were supposed to come back this afternoon to hook the propane up to the boiler, but they didn’t. They did deliver and install the propane tank, and it is big! 1000 gallons. Given what it costs to fill I sure hope that lasts us a while. Hopefully they’ll be back tomorrow.

Dan Peel was there with a helper and they hooked up the manifolds and piping and connected all of that to the hot water exchanger and propane water boiler. Dan’s a great guy, and really knows his stuff. Unfortunately the boiler had a loose part inside and when they pressurized the system it leaked Glycol/Water all over the place. Dan had also slightly misjudged the amount of Glycol he’d need so they could only fill one of the two manifolds. They weren’t done until 3:30, and the propane guys weren’t back so they left. They’ll be back tomorrow.

Dad came around 1pm and we took off to Monaghan’s to collect our three interior doors. They’re made by Madawaska Doors and they’re Western Red Cedar. Dad and I did a bit of work on the electrical and insulation in the back room. Dad and Rene will be back tomorrow.

Simon got most of the electrical system hooked up yesterday but there were some problems with the charger that prevented us from using the generator to get the batteries charged up - they’re a little low from sitting in storage. Plus the panels still have to be put on the roof and there’s some plumbing and stuff for the hot water system. When I talked to Simon he said he’d be back tomorrow. 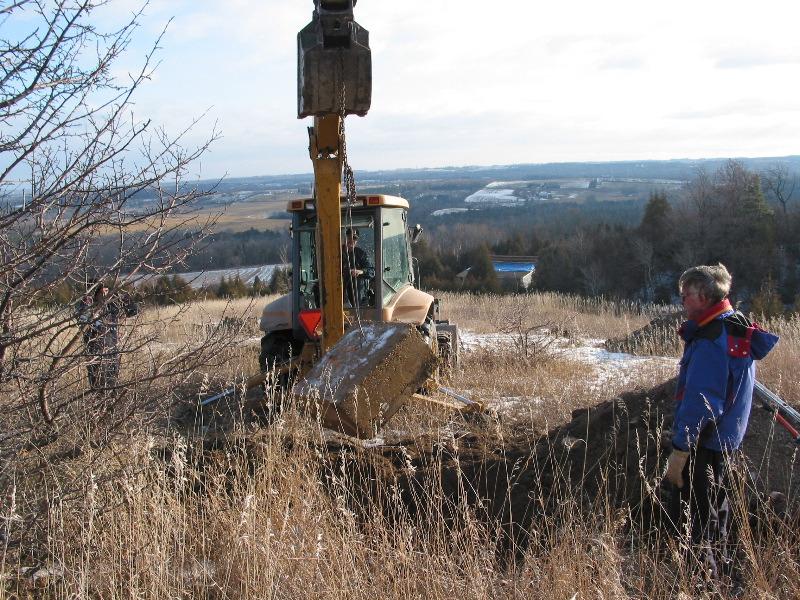 Half a Fine Day

We had Mike and Dave for only half the day today so we started at 8am. It was warmer than it has been for a while and we set them to work on trimming the back beam and setting up the boxes for the back windows. Meanwhile Rene finished up the fascia board and put up blocks for the ceiling drywall. I helped Dad, helped Mike and Dave, and shovelled the last of the snow off of the roof.

Jo and my Mom stayed behind in Omemee and put another coat of stain on our doors. When they arrived at the land Jo and I took off for Peterborough and bought our chimney and flashing. We’re going to install the chimney now, so that the roofers can flash the whole thing in properly. We don’t really know for sure when we’re going to put in a fireplace or wood stove.

When we got back Eric had arrived and was in the process of installing our wind tower anchors at the top of the hill. He carried two anchors at a time in the bucket of his backhoe. So we’re ready to get the wind tower installed. As an added bonus Eric’s coming back tomorrow to install our septic tank and cut the trench from the well to the house. Things really seem to be rolling along! It’s very exciting.

All of the pictures are of Eric installing the anchors.